There are times when you want a small group of people to sit down for a festive dinner which looks special, but is not too complicated or time consuming. Here is a recipe which fills these requirements.

It consists of four flattened chicken breasts. Two are placed on pastry and topped first with stuffing, then with the remaining breasts. They are wrapped in pastry, garnished then baked. The package is best served hot and when sliced should show colourful stuffing between layers of chicken, the whole thing surrounded by pastry. 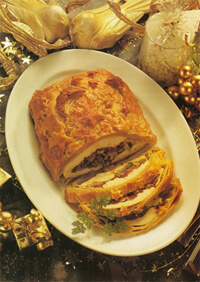 Pound each boneless, skinless breast between two plastic bags using a rolling pin, until the breast is double its original length and width.

Chop the onion, parsley and sage finely. This may be done in a food processor or by hand.

Heat the oil in a frying pan and gently cook the onion and herbs until the onion is soft and transparent but not browned. Add the pine nuts and brown very lightly.

Wash and chop the spinach. Cook briefly until wilted, then drain and stir into the onion mixture.

To make a red layer use sun dried tomatoes or a drained jar of sliced red peppers. If using the tomatoes, chop them and soak them in a little boiling water for 15 minutes. Roll the pastry out thinly and evenly on a floured and double strip of baking paper until it is 45cm square.

Place two of the flattened fillets side by side on the centre of this, patting them into an oval shape. Spread the spinach an onion mixture evenly on top, leaving the edges clear, then arrange the drained tomatoes or peppers on this. Place the two remaining fillets of chicken on top, covering the stuffing. Pat into a neat shape.

Now cut the four diagonal lines from the corners of the pastry to the chicken.

Beat an egg with 2 teaspoons of water and ½ teaspoon of salt. Keep this on hand to brush the pastry layers to help them stick to each other, then later to brush the surface.

Now fold the pastry over the chicken. Fold the ends in first, trim away excess, then fold the longer sides of pastry over the chicken. Again trim away excess pastry, but leave enough to fold under the ends. You should finish up with an oval package. Brush the surface with egg mixture. Cut whatever shapes you like from the pastry offcuts. Place on the egg-brushed surface and brush again.

Lift the baking paper and the pastry package onto a sponge roll tin and bake at 220°C for 45-60 minutes until golden brown. Lower the heat or cover the pastry loosely if the top browns too fast.

Leave to stand for 10 minutes before serving. This is nice served with new baby potatoes, baby carrots and seasonal green vegetables.