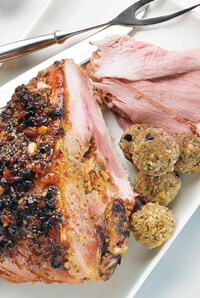 1. Preheat oven to 180°C. To make the ham glaze, combine the fruit mince, sugar and mustard in a bowl, adding rum or whiskey if desired

2. To prepare the ham, run a knife around the shank end of the ham. Carefully slice under the edge of the rind at the base of the ham, then ease between the rind and the fat with your fingers and pull to gently remove the rind

3. With a sharp knife, score the fat in a diamond pattern with 3mm deep cuts. Place the ham in an oven pan large enough to catch any glaze that will drip as it cooks. Surround the ham with orange juice (or wine, as preferred)

4. Smear the glaze over the scored fat of the ham. Place the ham in oven to bake for one hour, basting at regular intervals until glaze has caramelised

5. Sliced ham can be served hot or at room temperature